The Storms of Denali Book Tour: The Ethics of Climbing and Parenthood 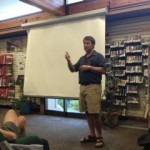 The McCall Public Library was a great venue for my first reading in Idaho. The weather was sunny and warm outside, with jet skis zipping over Lake McCall, a sparkling sapphire of a lake in northern Idaho. With all the the sunny weather and recreation opportunities, would anyone show up for the reading? I set up my slide projector on a computer table. Librarian Lida Clouser pulled down a screen for the slide show. She brought her husband and kids, who sat in the front row. One of her sons told her that he wanted to be either a writer or a climber when he grew up. Guess what, she said, the guy giving the talk tonight is both! The pressure was on. Gradually people filed in, sitting down on the overstuffed chairs. Chatting with them, I discovered than one man had attempted Denali and many read climbing literature., so I knew they would love The Storms of Denali. By the time I started my reading, over 20 people were in attendance. After the reading and slide show, I asked for questions. This is quickly becoming my favorite part of the book tour, as I get a sense on how people are responding to The Storms of Denali. “Can you comment on the ethics of a husband and father going on a dangerous climb?” a woman in the front row asked.  “That was one of the questions I wanted to explore in the book,” I said, thinking of what I discuss in  my writing classes through The Writer’s Workshop. “The narrator, John, is a husband and father, and he feels a lot of guilt about being gone and away from his family, but he still goes on the trip. His climbing partner Wyn doesn’t see any conflict with marriage and parenthood and difficult climbing routes. The two of them argue about this in the course of the book.  In the end, I think readers will understand what I think about this issue, but in a novel you don’t want to make an obvious pronouncement; you want to embody it through the characters. You want readers to discover it as if on their own.”  The answer seemed to satisfy her. I looked over at the boy who was in the front row, holding my ice hammer. What did he think about the issue? The enthusiasm for climbing shone in his eyes. The summit seemed in his sights, no matter what the ethics or obstacles.